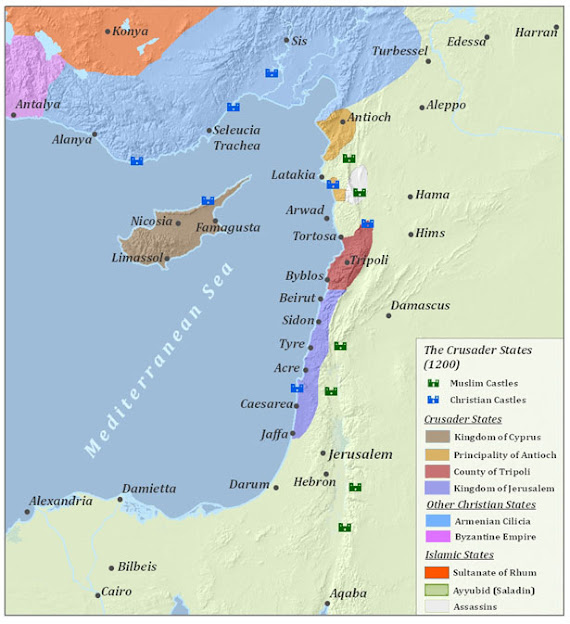 In 1273 King Hugh Lusignan of Cyprus lost control of his chief mainland fief of Beirut in the Holy Land. This was due to the marriage of the heiress, Isabella d'Ibelin, to Hamo Lestrange. Hamo was one of the followers of Lord Edward, and had come to Palestine in the company of the future king. He was a lord of the March in Wales, and like his master had earned a reputation for courage and cruelty. The Westminster chronicler gave Hamo a spectacular write-up:
“...a man of the greatest notoriety as a plunderer, who, although he had often borne himself gallantly in the shock of battle, nevertheless, in consequence of his tyrannical cruelty, deservedly received the brand of Traso, instead of his name of Tyro”.
Traso was derived from the Greek 'Thrasos', the personified concept of boldness in both positive and negative terms; it can mean courage or over-boldness or insolence. When Thrasos appears as a personified form in Greek legend, it as a malicious and suspicious being, mentioned together with Hybris (hubris) and Atë, the goddess of mischief, delusion and ruin. Euripides described Thrasos as an irresistible, unconquerable, unholy spirit. Tyro, by contrast, means a recruit or novice.
The marriage was probably Edward's initiative, to forge closer links between the Latin realms of Acre and Beirut. It was also at the instigation of Isabella, who was in trouble with the Pope. She was carrying on an affair with Julian of Sidon, a notorious rake who had previously distinguished himself by murdering a Mongol warlord, and then running away when the Mongols came for revenge. While he played with Isabella, Julian was already married to Euphemia, daughter of the King of Armenia.
Two successive popes, Urban IV and Clement IV, were so enraged by the scandal they issued two papal letters, Audi filia et and De sinu patris, which condemned noblemen and noblewomen for inappropriate behaviour. Isabella was urged to remarry or burn in Hell. There was also the problem of incest: Julian was the grandson of Balian of Ibelin, while Isabella was Balian's great-great granddaughter. To save herself from Rome, Isabella put aside her lover and agreed to marry Hamo.
When Edward left the Holy Land, Hamo chose to stay in Beirut with his new wife. He must have found the splendour and exotic surroundings of the Holy Land a very far cry from the damp, rainswept Marches of Wales. Whatever his flaws, Hamo must have loved Isabella, even at the risk of his faith. In 1273, about a year after Edward's departure, Hamo fell mortally ill. On his deathbed he was informed that King Hugh of Cyprus was planning to seize his widow. Hugh's plan was obvious: get hold of Isabella, marry her off to some crony, and thus re-establish direct control of Beirut.
To prevent this, Hugh took a drastic step. Shortly before he died, he placed Isabella in the care of none other than Baybars, the all-conquering Mamluk sultan, whom Hamo had come to Palestine to fight. It says much for the Lusignans that a Frankish noble would rather place his widow in the hands of an Islamic warlord.
Baybars was happy to accept. The sultan has a brutal reputation, but in this case he did no more than was asked of him. After Hamo's death, King Hugh pounced and tried to carry off Isabella to Cyprus. Baybars at once cited the pact and demanded her return. The High Court of Cyprus gave the king no support, and he was obliged to send Isabella back to Beirut, where a Mamluk guard was installed to protect her.
However, King Hugh got his way in the end. The death of Baybars in 1277 removed that obstacle, and then Isabella herself died in 1282. Beirut passed to her sister, Eschiva, the wife of Humphrey de Montfort, a loyal support of the King of Cyprus.
Posted by David at 04:21