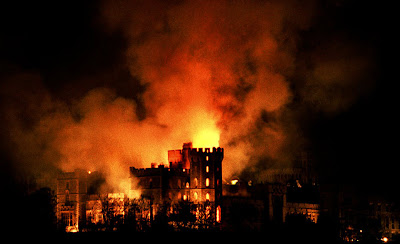 The baronial defeat at Evesham seems to have brought out John's inner arsonist. First he had to contend with the victorious Lord Edward, who had wooden bridges built so he could approach John's camp at Axholme. In December 1265 the two sides made peace at Bycarr's Dyke in Nottinghamshire, but treaties meant little in those days. Within a few months John and his followers were on the loose again.

Their first target was Sheffield, where they made a great slaughter of the inhabitants and burned the town and castle to the ground. John then rushed to join Robert Ferrers, the Earl of Derby, who was mustering a new army at Chesterfield in Derbyshire. True to form, he sacked and burned more towns and villages on the way.

As the highest-ranking of the surviving rebels, Ferrers was the natural replacement for De Montfort. Unfortunately, he was little more than a selfish freebooter, and lacked the mental and physical capacity to fill the dead man's boots: he suffered from hereditary gout, and had to hobble everywhere on crutches.

Despite his uninspiring presence, the army Ferrers gathered at Chesterfield was a formidable one, especially when joined by John's Yorkshiremen and a band of Lincolnshire men led by Baldwin Wake. A royalist army led by Henry III's nephew, Henry of Almain, raced north to crush them, and fell on the rebels as they lay encamped outside the town. What followed was a sort of medieval Battle of the Somme, as both sides slugged it out for hours amid mud and torrential rain and steadily darkening skies.

By nightfall the rebel lines were shattered. John escaped into the forest - "The bold Deyville to the woods and fields", as one chronicler had it - while Ferrers fled into the town and hid under a pile of woolsacks in a church. He was betrayed by a woman whose lover he had hanged, clapped in chains, and carted off south to imprisonment at Windsor.

The Disinherited were now reduced to the garrison at Kenilworth Castle and a few scattered bands of outlaws. Never dismayed, John galloped back to Axholme, rallied his surviving followers and immediately led them out again. They stormed Lincoln and Norwich, burning and looting in the old style. At Lincoln they deliberately targeted the Jewish quarter, murdering and abducting Jewish moneylenders and burning deeds containing lists of Christian debtors. John owed a great deal of money to the Jews, and this was one way of rubbing out his debts. 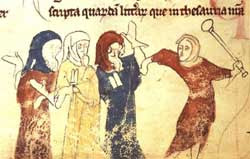 A medieval illustration of Jews being attacked by Christians

He then threw himself into the Isle of Ely in Cambridgeshire, Hereward the Wakes's old stronghold, and established a fortified camp among the reeds and fens. The chronicler Robert of Gloucester noted that:

"Sir John Deville and others, that disinherited were,
Took the castle of Ely, and held them fast there..."

From there his men raided the surrounding area. Cambridge was only spared because the burghers paid John danger money, and he wrote a letter exhorting the people of the town to join the rebellion. Many flocked to his banner, including a townsman named Robert Hood and another local man named Jean de Petit (John the Little).

In despair at the ruinous state of England, the papal legate Ottobuono attempted to mediate with the rebels in Ely and Kenilworth. They rejected his peace terms and replied that they regarded their cause as just: they proclaimed their loyalty to the King, to the Provisions of Oxford, their religious faith, and invoked the memory of Simon de Montfort. It seems that despite his talent for mass destruction, John had certain principles at heart.

Principles or no, his nest of rebels had to be dealt with. A royal force advanced on Ely, only to find that John's men had dodged past them and were bearing down on London. The rebels torched several Hertfordshire towns on their way to the capital, and arrived at Southwark on 11th April 1267. Here they were met by the forces of the young Gilbert de Clare, Earl of Gloucester, who had thrown in his lot with the cause of the Disinherited. 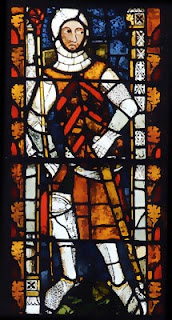 Earl Gilbert de Clare, Earl of Gloucester, known as Gilbert 'the Red' for his shock of red hair

For two months the capital was a rebel camp, and from his base at Southwark John took the opportunity to rob and pillage to his heart's content. He even smashed his way into Westminster Palace and carried away the goodies within, including the doors and window frames. The King declared John to be his chief enemy, and his excommunication was publicly renewed at St Paul's on Good Friday.

The occupation of London ended when, against John's wishes, Gloucester secured a royal pardon on the 15th June and agreed to quit the city. John and his followers could not hold out on their own, and on the following day they were granted a truce. On the 18th June the King re-entered his capital in triumph.

Incredibly, considering the widespread damage and loss of life he had caused, John was granted a royal pardon at St Paul's, "for the sake of peace", and allowed to go free. The remainder of his men at Ely were soon forced to surrender by the Lord Edward, who smoked them out by ordering the reeds in the fens to be set alight. Kenilworth had already surrendered after an epic siege, and so the revolt of the Disinherited was all but over.

Though his rebel past was not held against him, John remained encumbered by debts for the rest of his life, and the King and his successor, Edward I, seem to have been careful to keep him in a state of near-penury. Edward was not one to ignore a man of such destructive talents, and several times employed John as a knight banneret in Wales. As well as obligatory military service Edward employed a clever series of financial alleviations and demands - carrot and stick - to keep the aging war-dog at heel.

Sir John Deyville died in the early 1290s, no doubt worn out by a life of riding about at great speed and setting fire to things. A hard man in a hard time, medieval chroniclers were surprisingly fond of him: to Henry Knighton he was 'a canny fellow and a doughty warrior', Pierre Langtoft described him as 'bold and valiant', and the unknown author of the contemporary Song of the Barons referred to "Sir John Deyville who never liked treason or guile." Even more recent writers such as E.F. Jacob and Maurice Powicke have praised the old brute's influence and character.

Hopefully these two articles have shed some light on a virtually-forgotten figure of the Baron's Wars. Simon de Montfort is still popular today, and the general trend is to praise him to the rooftops as the founder of modern parliamentary democracy. It's worth remembering that De Montfort's brief power and success were propped up on the armoured shoulders of men like Sir John Deyville, whose only use for a ballot paper would be to set fire to it...

I must chiefly credit Oscar de Vill for his fine series of essays and articles on the medieval Deyville family. These include:

6) Nottingham Medieval Studies, XLII (1999): 'The Deyvilles and the Genesis of the Robin Hood legend'
Posted by David at 05:18