Along with Count Floris of Holland, another of Edward I’s dubious allies on the continent in 1297 was Adolf of Nassau, King of the Germans. This so-called Grand Alliance was a hilarious shambles, with everyone taking bribes and vigorously stabbing each other in the back. Great fun. 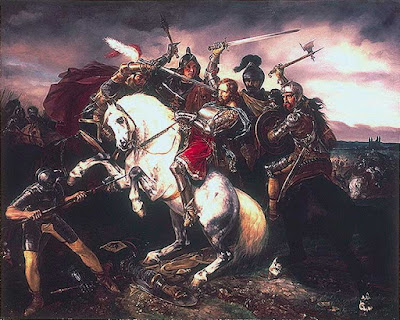 In February 1297 Adolf met with Count Henri of Bar and a group of Burgundian nobles at Koblenz. There they made plans to attack the French on Edward’s behalf when he landed in Flanders. Adolf solemnly promised that he would send German troops to aid the Burgundians before 22 July. He also promised to send assistance to Henri. In return for his services, Adolf was promised a fee of £60,000 by Edward, to be paid in three instalments.

On 4 June Henri invaded the county of Champagne, in an effort to distract the French and prevent the invasion of Flanders. When the French launched a counter-attack, Edward sent a message to Adolf pleading with him to march to Henri’s aid:

“Since our son, the count of Bar, has begun war against the King of France and, furthermore, given that none of our other allies are in this region, and because he is under greater attack by our enemies than any other, we pray and earnestly entreat your highness that you will it that the said count be given aid by those of your men who are nearest him and who can best act in such manner as may protect [him] against our common enemy; this until we are able to provide other assistance there.”

Adolf did nothing. He broke all his promises to Henri and the Burgundians and used Edward’s money to fund a private war in Germany. Over the summer he opened negotiations with the French: this was after taking £40,000 from the English. Edward has been criticised for not paying the final instalment of £20,000, which is difficult to understand. Why would he give any more cash to a man who had betrayed him?

The English king took his revenge. On 27 July 1298, a few weeks before the battle of Falkirk, Adolf met his enemy the Duke of Austria at Gollheim on the Upper Rhine. As he did at Evesham, Edward had sent a hit-squad to hunt down his enemy on the battlefield. This was a band of Welshmen, probably detached from the main army in Flanders. A French chronicle records Adolf’s fate:

“And though king [A]dolph bore himself boldly that day, in the end, however, a Welshman jumped onto his horse from behind and tried to cut his throat; when he was unable to do so, he dropped his weapons and threw him onto the ground; he [Adolph] was captured by the duke of Brabant. The duke of Austria also saw this and ordered him to be beheaded on the spot by one of his squires. And after huge carnage on either side, those on the king's side who could flee escaped.”

(The pic is an illustration of the death of King Adolf by Simon Meister, 1829)